Aspies have a reputation as encyclopedias of useless information. We’re the geeks, the braniacs, the little professors. I’ve done more than my share to keep this stereotype alive. I’m a treasure trove of seemingly useless facts and I have superhuman memory for random bits of information.

I know that tigers are solitary animals while lions prefer to live in groups. The last half dollar to be made of mostly silver was the 1964 Kennedy half dollar. The normal human body temperature is not actually 98.6 degrees. The minivan was invented to take advantage of a loophole in CAFE standards.

Why do I accumulate and catalog so much random information?

I think aspies are innately curious by nature. I know that I am. But I think a bigger factor, at least for me, is the tendency to see the world in patterns.

I can’t help noticing patterns and, when a pattern is broken, I need to know why. For example, have you ever noticed that the tops of school buses are painted white? I have.

Most people will see this and go “huh” and carry on with their day.

But I see the white top on a bus and need to know why it’s there. It’s not arbitrary, right? Someone, somewhere, at some point decided that painting the tops of school buses white is better than painting them yellow. A policy was created, money was budgeted.

At least that’s what I find myself hoping when my daughter finally decides to Google “white tops of school buses” so I’ll finally shut up about it.

That’s how I came to know that painting the tops of school buses white makes the buses cooler (by reflecting sunlight) and safer (by making them easier to see). Also the flashing white light on top makes school buses visible from a greater distance in fog or rain.

In case you were wondering.

The thing about this kind of useless knowledge is that it doesn’t feel useless to me. I like thinking about the simple elegant solution that a change in paint color presents and I like knowing why a familiar pattern has been broken.

Now if only I knew why bacon in a box doesn’t have to be refrigerated . . .

This is my contribution to Autistics Speaking Day 2012. Because this is a day centered around autistics speaking for and about themselves, I’d like to also link to a short post  I wrote a month ago that contains links to many other blogs and websites by autistic people: See. Understand. Experience. Autism. You can also find many more contributions at the Autistics Speaking Day website.

I’ve been autistic all my life, but I’ve only been aware of my autism for nine months.

As a kid, I didn’t realize I was different until people told me.

Sometimes they told me in actions: laughter, rejection, intimidation, bullying.

Sometimes their parents told me for them: We know you’re just using Leah because you don’t have any other friends. She’s not allowed to have you over until you learn how to be a true friend.

Sometimes my own parents told me: quit bellyaching, you need to make more friends, all that crying isn’t normal, it’s time to grow up and be like other girls. 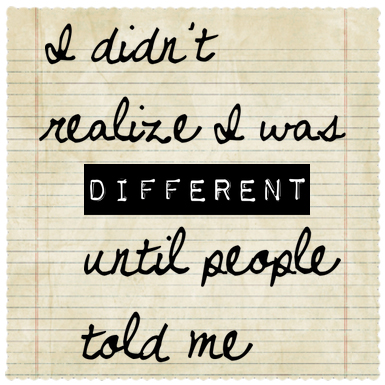 I got the message: you’re broken; fix yourself.

I had a lot of determination but few resources.

Eventually, I gave up trying to fit in and embraced my weirdness. I found friends who were equally weird.

Being defiantly different became my thing; sometimes it still is.

But much of the time now, I forget that I’m different. When I’m alone, I forget. When I’m with the people who love and accept me unconditionally, I forget.

Until someone else reminds me–with a puzzled expression or a sarcastic remark–I forget that my brain functions differently from the other 99% of the human race.

I’m not just different on the outside–shy, quiet, awkward, odd.

I’m different on the inside. My wiring is nonstandard.

I’m not broken. I don’t need to be fixed.

What I do need is a little support here and there. Patience, humor, understanding.

Not pity or sympathy.

Not to be made normal.

You’d feel better if you got out of the house more.

You’d feel better if you paid more attention to your looks.

To the people who think this is helpful advice I want to say:

Because until you said that, I felt fine.

This is my normal. It’s not like most people’s normal, but it’s the only one I’ve ever known and I’m content with it.

I forget that I’m different until you remind me.