You’ve been putting off writing this for a while, haven’t you?

And how’s that working for you?

Well, I wrote posts about functioning and the verbal-nonverbal disconnect and executive function to avoid what I really wanted to write about.

Because I don’t live “independently.” I never have. I don’t know if I could or not. I probably could if I had to, though maybe not as successfully as I’d like to pretend.

You’re doing it again, veering into an easier topic to avoid that shame thing a little longer. 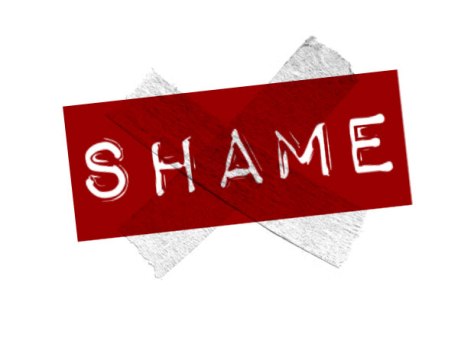 Hey, enough with the Googling! Get back here and write something.

Relax. I needed context. How about this:

Shame is rooted in our perceived defects. When those defects are revealed to others, we see ourselves in a negative light. Shame creeps in.

Okay, okay. Here’s an example of what I want to talk about:

If I don’t shower for three days and there’s no one around to notice, who cares. I got busy. I was distracted. My routine was thrown off. I forgot. It was too hot or too cold or too whatever. All of this makes sense to me.

I don’t smell great, but no one has ever died of body odor and there’s a simple remedy.

It’s not a big deal to me. It’s not a moral failing or laziness or a reflection on my ability to do other adult-type things. It’s simply impaired executive function with a side order of sensory processing issues.

300 words into this and only 24 of them are about shame so far. How, exactly, does the shame figure into this?

The shame happens when someone else is around to notice that I haven’t showered or brushed my hair or ironed my clothes or that I’m wearing the same shirt as yesterday, and oops it has a spot of last night’s spaghetti sauce on the front.

Just writing that sentence has me cringing and wanting to delete it and trash this post and never talk about this subject again.

Worried about what the readers will think of you?

Exactly. We’re supposed to master self-care as a child or, at the latest, as a teenager. Not being able to accomplish basic self-care tasks consistently on a daily basis–and worse–not noticing or seeming to care, suggests a certain lack of maturity. A lack of common sense, of intellectual development, or even of self-awareness.

I’d like to think I have all of those things, at least to the degree that the average adult does.

But I suspect others might see it differently. If you can’t manage to brush and floss every day, how on earth will you manage complex tasks like paying bills, driving or getting to work on time–let alone caring for another person, particularly a helpless little person?

I know, and I don’t have a logical answer. It’s not as if I don’t know what self-care entails or can’t execute the necessary steps required. It’s not even that I’m intentionally not doing what is expected.

My self-care falls apart because it slides under the radar. This is going to sound unfathomable to the average adult, but I don’t notice. For example, I shower as part of a daily routine: exercise then shower. On the days I don’t exercise, I have to think about when to shower. Sometimes I keep thinking about it until dinner or bedtime. Sometimes I need to be prompted to go do it. If no one is around to do the prompting, well, the day could be gone–and I never shower before bed because that’s somehow a rule–and that’s that.

Maybe you need a minder.

I have one! The problem is, I’m married to him. How uncool–not to mention unromantic and unsexy and un-equal-partnership-y is it when my husband needs to remind me to do all these little things? He’s not my caretaker. It’s not his responsibility–or at least I don’t think it should be.

It’s hard on a relationship when one partner has to assume a caretaking role at times. There’s an element of “not what I signed up for” regardless of how generous and loving your partner is.

I’m lucky to be married to someone who gets it, who knows how to broach the subject in a nonchalant way or make just the right amount of a joke about it. But there are times–painful for both of us–when the thing at hand, the thing that’s flying under my radar, is just a bit too much, too personal, too uncomfortable.

So he doesn’t tell you?

Oh no, he tells me. He agonizes over whether he really needs to say something, but in the end he says it. I can tell by his voice, the way he starts the conversation, that what he’s about to say is costing him. And those are the moments when I realize how strong our relationship is and how hard we’ve worked to get to this place. I appreciate that he loves me enough and is honest enough and brave enough and mature enough to say the hard things, the things that the average husband is not going to have to say to his wife.

You’ve written yourself into a corner again, haven’t you?

How can you tell?

It’s been four days since you opened this doc. That means you’re dead in the water and this is going to end up being one of those posts that never gets finished.

You’re right, I was stuck. But I gave a draft to The Scientist. He read it–slowly, carefully, in the way that he reads whatever I hand him. Then he said, “Your sincerity and passion and discipline and all of your other good qualities overshadow this other stuff for me.” He said it’s about care and that I deserve to have someone care for me.

I pushed a bit, asked him if he doesn’t get tired of having to remind me about all those little things. He laughed and said, “Of course, but what am I going to do? We chose each other.”

And suddenly everything seemed so simple

What started out as a post about shame has become a post about love. Because where I look at myself and see executive dysfunction and shame and dependence, my husband looks at me and he sees what he always has: me.

How nice for you.

Okay, okay, I get it. I let myself get seduced by the guy I married. Again. He has a way of doing that. But I think there’s a hint of a solution in that last realization. He accepts me as I am, even when I don’t. He cares for me, even when I’m not sure I deserve it.

I’m hard on myself. I always have been. Perhaps that’s a coping mechanism. I scrutinize everything about myself down to the most minute details, because I so often discover after the fact that I’ve missed the obvious.

That might be where the shame is coming from, that feeling of failure, of not living up to some imaginary standard. I’ve spent weeks writing this, months thinking about it. I’d like to say I have some grand conclusion but all I have is a tentative realization: Questioning the shame–pulling it out here into the light–is hard, but it feels like a good beginning.