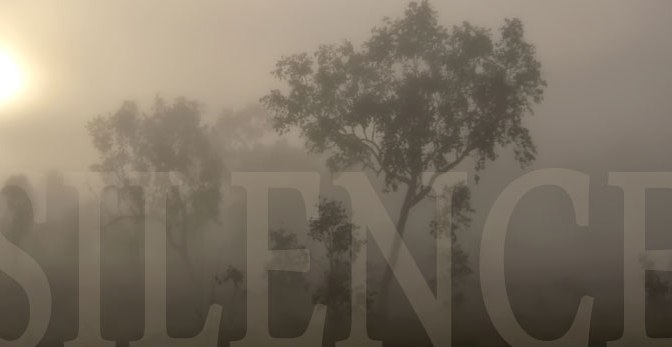 The first in a 3-part series on silence.

My silence is frustrating. For me. For others.

I don’t mean the silence between the words, the comfortable kind, the long drive in the car, relaxed lunch in the park, playing video games for hours side-by-side on the couch, reading together kind of silence.

Frustrating silence is the kind that arises in place of words, filling up all the space where the words should be. It starts with a heaviness in my chest, like my breastbone has become a plate of armor thick enough to stop a lance or a bullet or a barrage of charged emotions.

The weight holds the words down, tethered tight, floating out of reach. I can see them, hear them. Inside me, there is a cacophony of noise as the words rattle and clash, struggling to escape. It feels as if I’m shouting and yet there is no sound, except within me.

Then one breaks free. Two. Five. A phrase or a sentence. Small and inadequate to the task, they float up, fill with breath, are shaped by tongue and lips. Often the ones that escape are the most practiced. Scripts. Platitudes. The reliable “I don’t know.”

Here is where the frustration comes in. The person I’m interacting with knows that I can speak. Get me going on a topic that interests me and I’ll machine gun words at you until you wave a white flag of bored, befuddled surrender.

The logical conclusion–the one even I would jump to if I wasn’t inside my head–I’m intentionally being silent. Inappropriately silent, considering the gravity of the situation, the emotional significance of the moment.

It must be difficult to conceive of temporarily losing the ability to speak if you’ve never experienced it. I can’t imagine, for example, losing the ability to ride a bike or write the alphabet. So when people express disbelief that they’ve shared something personal, important, meaningful, difficult and all I can do in response is stare off into the distance . . . I’m right there with them.

I am no more enjoying my frustrating silence than they are.

87 thoughts on “Silence I: Frustration”