Aspies are often labeled high functioning by default. Some people even seem to think it’s a compliment.

“You must be very high functioning. You don’t seem autistic.”

“Why, thank you. And you’re not especially ugly.”

Because, yeah . . . being told you’re “not that autistic” like it’s a good thing is hard to swallow.

Applying functioning labels to autistic people is problematic. Maybe an example will help illustrate why.

Mary is a wife and mother. She’s been steadily employed since age 16, has a BA degree and runs her own small business. She exercises regularly and is health conscious. When her daughter was younger, she volunteered for parent committees, hosted sleepovers, coached softball and drove carpool. As the more detail-oriented spouse, Mary has always managed the family finances and investments. She has a diverse set of hobbies and pastimes that include dog training, target shooting, reading mystery novels and fiction writing.

Joan is a wife and mother too. Her marriage has been rocky at times, thanks to her undiagnosed ASD, and she has no close friends. Joan works at home, avoids speaking to people on the phone and prefers to spend most of her days alone. Joan sometimes needs to be reminded to brush her hair, shower or put on appropriate clothing before going out. She’s never negotiated a lease or car purchase by herself and has never lived on her own. She enjoys going to the zoo, vacations at Disney World, animated movies and has several stuffed animals that she likes to hug after a hard day.

It’s obvious that Mary is high functioning and Joan is low functioning, right?

What if I told you that Mary and Joan are the same person–that I created Mary and Joan by selectively using aspects of myself to construct two polarized versions of me? I am all of those things–“high functioning” one moment and “low functioning” the next. 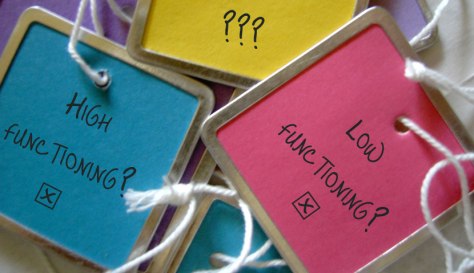 A Nonuniform Set of Competencies

One of the central problems of functioning labels is that they presume a uniform set of competencies. Just as neurotypical people aren’t uniformly skilled at everything, autistic people have varying levels of competence in different areas of our lives. For some of us, these levels can be wildly and incongruously varied. They can shift over time, meaning that we might appear to very competent in one area today and much less so a month later.

Driving is a good example. Some autistic people drive and some don’t. Some learn to drive later in life and some as teenagers. I learned to drive at 15 and got my license the week I turned 16. I’m a good driver but I’ve learned that there are times when I need to be extra careful. If I’m overloaded, my ability to take in all the information required to drive safely is diminished. I’ll do some minor “careless” thing like drive over a curb and back into a parked car (or a telephone pole or a payphone).

Most of the time I’m a “high-functioning” driver. Sometimes I’m not. I’ve learned how to recognize when I might not be at my best and make allowances.

Sometimes I see people use high functioning as a badge of honor, like they’ve won the autism game.

My son has high functioning Asperger’s.

The subtle implication is often “not that defective.”

I understand the urge to want to signal “not that bad.” Autism carries stigma. Simply saying “I’m autistic” or “my child is autistic” can be stigmatizing. That’s a fact of life and one we can’t escape. So people say high functioning as a way to lessen their discomfort.

But there’s a danger of people hearing high functioning, with its “not that defective” undertones, and equating it with “doesn’t need supports or services or accommodations or even any sort of understanding or acceptance.”

If you’re high functioning, you must be fine, right? You don’t really need a little extra time to complete your work or to get instructions in writing or to sit in a quiet place so you can concentrate. You can just high function your way around all those little problems and get stuff done like a normal person.

Because if you’re high functioning, you’re practically normal! So close to normal. So, so close.

If only you would work a little harder and get the rest of your functioning ducks in a row, you’d be all set. And then the question becomes, why aren’t you doing that? And why are you suddenly backsliding? We fixed this thing and that thing and the other thing already. Why is it a problem all over again?

Just as functioning isn’t uniform, it isn’t linear either. There is a commonly seen phenomenon in autistic children where they’ll make big gains in elementary school then “regress” when they hit adolescence. Or a child will be labeled a late bloomer, seeming practically “normal” in their teen years, then “backslide” dramatically when they go off to college or enter the adult world of work and independent living.

The idea of backsliding or regressing implies that the executive function deficits, sensory sensitivities and other cognitive differences that come with ASD can be fixed, like a broken leg. Parents and others are surprised when, after the metaphorical cast has been off for years, their child suddenly starts limping again.

What they don’t see is that life has delivered a metaphorical baseball bat to the kneecaps.

“Functioning” is fluid, nonlinear and nonuniform.

Do I contradict myself?

Very well then I contradict myself,

(I am large, I contain multitudes.)

Note to regular readers: I haven’t posted in over a week because I’m a little under the weather. Finally starting to feel better but this may be the only post this week.